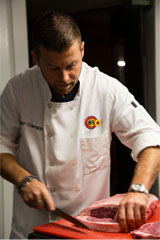 James Martin is our Executive Chef/Owner/General Manager of 85 Main which he opened in June 2005, partnering with Barry and Brian Jessurun of The Vanilla Bean Café. James is an accomplished self-taught chef with a career full of highlights. In 1999, James helped open The Back Eddy, a 250-seat restaurant with two­-time James Beard Award recipient Boston Chef Chris Schlesinger. He moved on in 2002 to be the Chef/Manager of The Vanilla Bean Café in Pomfret, CT. before opening 85 Main in 2005, setting a new standard of excellence in the “Quiet Corner.” With James at the helm, 85 Main has earned the support of its small-town community and beyond, becoming a catalyst in the revitalization of Downtown Putnam as a cultural and culinary destination.
[Learn more about Chef James Martin here]

Zack Brown  is our Head Chef – he has not yet provided us with his bio. We keep asking. Fortunately that is the only problem we have, aside from the missing picture. Have you seen my knives? More info soon? 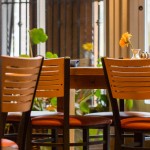